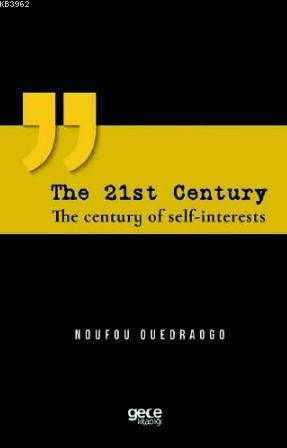 Emeği Geçenler :
The 21st Century; The century of self- interests

The twenty-first century is undoubtedly the century of interests. Everyone goes on his own way
for self-interests. Most of people do not care about others, provided that the goal they have set is
reached. In any way whatsoever! And unfortunately in this frantic rush towards the material good,
postmodern people consider their neighbours as objects, like a simple commodity. The two
previous centuries were characterized by the damages caused by the great wars and the slave
trade (namely World Wars, waves of colonization and others). This scenario closed, the current
century is not without reproach. We, the postmodernists' grandsons, hide ourselves behind the
veil of an unqualifiable cold war; putting a spoke in other people's wheels, thwarting the plans of
those considered as potential competitors, timorous opponents or irrepressible challengers. The
latter are always targeted and their plans must, at all costs, fall apart. In a word, they are
prevented from going forwards. The 21st century is illustrated by its high proportion of
egocentrism, paroxysm of perfidy, hypocrisy at the highest level and its frantic rush to profits.
The main purpose is to reach one's goal regardless of the manners. As if to paraphrase the
anecdote attributed to Nicolas Machiavel since the sixteenth century, 'the ends justify the means!'
Far from worrying about the fate of his fellow creatures, post-postmodernist people (the people of
the twenty-first century) constitute rather, very often, a barrier to their fellows' self-development.